If you don’t own a WEEGEE book, you should. News photographer Arthur Felig, dubbed ‘Weegee’ (derived from Ouija) for his eery ability to arrive right at the scene of a crime, is considered one of the most innovative photographers of the 20th century. Numerous books of his work have been published, this one comes highly recommended by Weegee fans. Out of print books like this one might go up in value once the used copies sell out, an extra bonus for art book collectors. 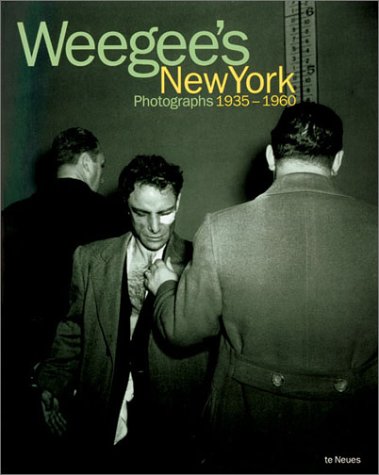 From the publisher: Legendary photojournalist Weegeeâ€™s unflinching eye led him to territory few other photographers of his time dared to go. His New York was not the glamorous world of nightclubs and bustling sidewalks, but of the back alleys and forgotten tenements that bore witness to the cityâ€™s tragedy and violence. Weegeeâ€™s New York is a city wounded by the Great Depression, in the throes of unemployment and poverty, of crime, corruption, and prostitution. Taken mostly at night, and marked by the characteristically harsh, artificial light that cast telltale shadows on their subjects, these photographs of crime victims, homeless vagrants, petty thieves, and resolute policemen document the gritty reality of Weegeeâ€™s world. The first news photographer permitted a police radio in his car, Weegee would race through Manhattanâ€™s streets after midnight, often beating the cops to the scene of the crime. The next morning his pictures would scream from the pages of the Daily News and the Daily Mirror. They still jump from the page today, with a restless an immediacy and intense edginess that has yet to be surpassed. The 335 photographs collected in this volume tell a story of New York during one of its most violent and exciting periods. They also tells the story of the man behind the camera, whose passion, curiosity, and humanity belie his role as uninvolved bystander. More than a record of superb photojournalism, Weegeeâ€™s New York is a testament to a man who refused to look away.Â